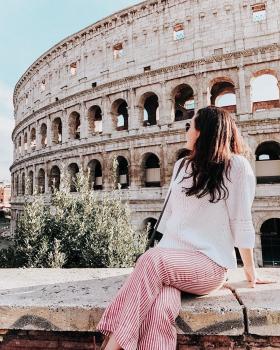 GreekRank rounded up the top sorority Instagrams (national and local chapters) again this spring semester. Some have tens of thousands of followers, others look like they may have been curated by a social media strategist, and others are downright beautiful.... Read more Ten Things You Should Know How to Do By 22 By 22, you’re officially saying goodbye to adolescence, and hopefully, hello to young adulthood. That’s because today, most Gen Zers are considered adolescents through their early 20s on account of the lack of responsibility and continued parenting that occurs then.... Read more

How The Government Shutdown Is Affecting Colleges The recent government shutdown is the longest in American history. Haven’t tangibly seen the effects of the shutdown on campus yet? You might be the only one -- and not because you go to a private school that’s technically not funded by any government dollars.... Read more

How To Handle A Hangover Based on our last post, we thought it fitting to address a need for those who weren't able to finish Dry January.  If you’re one of the lucky ones, a hangover means nothing to you. Somehow, you’ve been doing something(s) right, which have allowed your body to roll out of bed just before a 6am alarm to make it to a 7 o’clock class with not-so-glassy eyes, and barely-parched skin. Perhaps you’ve never drank water from a hot water bottle where BPA leached, or maybe it’s your twice-daily matcha green teas.... Read more

You’re Almost There! Tips To Make It Through Dry January So you’re one of the disciplined and noble among us who has vowed to undertake a Dry January, but three weeks in, you’ve hit a tipping point. It doesn’t make sense anymore. Your weekends are lackluster. What is life even?... Read more

10 Habits of CEOs To Start Now Morning routines, evening rituals, investment insights and spending basics. The habits of some of the most successful entrepreneurs and CEOs aren’t that foreign or difficult to implement in your own life. In fact, they’re trending. Tim Ferriss, Tony Robbins, and Lewis Howes are all publishing books on the morning habits of the most celebrated individuals of our times. ... Read more

Fake Frats We Wish Were Real It seems every other week, you’re reading headlines in national news outlets and college sites that tell the story of a fraternity that’s been revoked, dismantled, kicked off campus or suspended. At this rate, those who are uninitiated might be better off starting up a fraternity chapter of their own, or, joining a fraternity that’s not officially a fraternity.... Read more