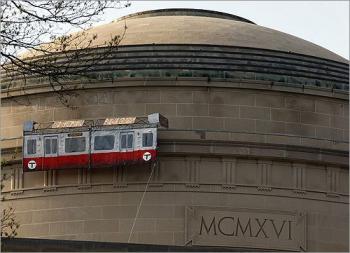 Van Wilder may have done it best. For those who sought to achieve long-lasting legend status, pulling off your school’s best prank would have been enough to make it in the word-of-mouth books. Not just a thing of high school senior year’s, college pranking perhaps hasn’t gotten the attention it deserves.

On a grander scale than any twelfth grade graduating class, these top college pranks made history because of the amount of people who were simply there for them.

Caltech Does the Rose Bowl

Over 100,000 fans were there when Caltech nailed the best bowl prank in history. And they weren’t even playing. It was the Washington Huskies against the Minnesota Golden Gophers at the 1961 Rose Bowl when Caltech students talked a Washington cheerleader into swapping the flipcards that appeared on bleacher seats with those that read “Caltech.”  Needless to say, the Washington Huskies cheerleader beared the worst of it.

Because we’ve opted to be judicious in selecting universities to feature here, and if we weren’t, MIT would topple this list, we’re only featuring them once. Remember that time MIT students hung a subway car off MIT’s Great Dome something like 10 years ago? Certainly a feat of engineering, since the solar-powered Boston MBTA-style vehicle had to have weighed multiple tons. Know it wasn’t the first time they’d put a vehicle on the top of the Dome, by the way.

Throwback to 1925 when Cornell University students convinced everyone that rhinos were real. Footprints of a rhino-like animal were found on the way leading up to the university’s Beebe Lake. Because a zoologist had identified them, and then a reporter got wind of it, the next morning the paper ran an article with a headline title “Rhinoceros Drowns In Beebe Lake,” and everyone’s sensibilities broke down. Turns out, it was just a student with a very, very heavy steel contraption and all the details right.

At colleges across the country, the idea of an organization of “Future Veterans of Wars” were formed after students became disenfranchised after post-World War One issues. In 1935, vets from WWI asked Congress to pay them their war bonuses ten years early in order to make it through the Great Depression hardships. Congress quite surprisingly said yes, and issued the prepayment via the Harrison Bill. When a Princeton student got to thinking about the fun he could have with the Harrison Bill, the Veterans of Future Wars were formed. Next thing you know, from Princeton to Chicago University to Vassar started their own leagues -- and members across the US joined.

It wasn’t your average-sized bra that hung outside of Texas A&M in 1973. It was huge. And, some would say, it wasn’t a prank, but an artwork installation. The student, or artist-in-residence, hung the mega-brassiere outside of the university’s academic building. According to the student’s accomplice, the cops came in 30 minutes, and “they were amuse.”