Few will beg to differ when we say Halloween weekend is one of the most fun times of the year. When the costumes come out -- from the clever Adult Swim characters to the barely there get-up's -- it seems alter ego’s do as well, with typically chill houses throwing down with the wildest parties and the most introverted among us finally coming out of their shells.... Read more Hundreds of men have moved on from collegiate Greek life into the glitzy and powerful ranks of society. It’s no surprise that many of the actors, billionaire CEOs, politicians and Grammy-winning musicians you know as famed celebrities are also Greek alumni. ... Read more It is that time of the year again. Recruitment season is about to be in full swing. Potential new members from across the country are looking to find the best sisterhood/brotherhood for them to spend the next 4 years with. We've had some shakeups in our rankings from last semester. Here are GreekRank's Fall 2016 top sororities and fraternities in the categories of Sisterhood/Brotherhood, Involvement, Classiness, Popularity, Looks, Fun, And Overall Highest Ranked.... Read more It's the beginning of a new school year and recruitment is already under way. Just in time, Greekrank.com has tallied up all of the ratings and rankings to unveil the fraternities and sororities who are the current Spring 2016 leaders in each of the following categories: Sisterhood/Brotherhood, Involvement, Classiness, Popularity, Looks, Fun, And Overall Highest Ranked.... Read more

Think of college and what comes to mind? Studying? Homework? Chances are that your college memories will usually be of a party. I’m talking about Fraternity parties. They come in all shapes and sizes, all over the country, but the question always remains. Who throws the best party? Which school reigns supreme? Here’s a list of the top Fraternity parties of 2015 thus far. Check out if your school or fraternity made the list.... Read more While there are hundreds of Pi Kappa Alpha chapters across the nation, there is one that year after year seems to stand above the rest. Some chapters tend to be more focused on specific areas such as academics, social Involvement, philanthropy, or athletics. The PIKE chapter at Florida State University consistently excels in all of these categories... Read more Greekrank.com has tallied up all of the ratings and rankings to unveil the fraternities and sororities who are the current all-time leaders in each of the following categories:   Sisterhood/Brotherhood, Involvement, Classiness, Popularity, Looks, Fun, And Overall Highest Ranked... Read more

Fraternity Tips - How to Choose the Right Fraternity 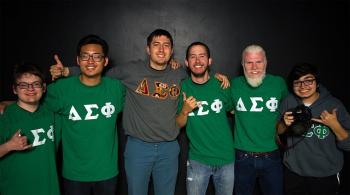 You have made one of the biggest decisions of your life to go to college. Congratulations! However, that’s not the only decision that you’ll have to make when it comes to college life. Another important decision that you’ll probably make is the decision to go Greek in college. Greek life has lots of benefits to offer to its members – opportunities to build a network, social/community activities to participate in, a strong brotherhood bond to maintain, and many more!  However, one of the biggest challenges college guys face at the beginning of their Greek life is choosing the right fraternity for themselves.... Read more