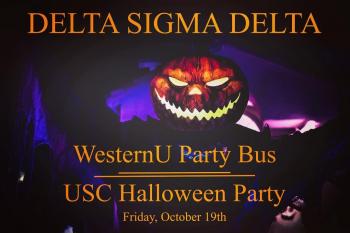 Few will beg to differ when we say Halloween weekend is one of the most fun times of the year. When the costumes come out -- from the clever Adult Swim characters to the barely there get-up's -- it seems alter ego’s do as well, with typically chill houses throwing down with the wildest parties and the most introverted among us finally coming out of their shells.

We surveyed discussions across Greekrank.com and social media to find the fraternities hosting what may be the biggest and best parties of the year. If you weren’t going to dress up, these Halloween parties might make you change your mind.

If you haven’t already gotten your tickets for this one, you’ve missed out. Kappa Sigma’s Halloween Crawl, in partnership with a neighboring nursing school, is sold out. It's the first time the fraternity hosted such an event -- or, “the best Halloween experience” as they call it. The party includes a costume competition, a Halloween “bar crawl” (or what seems more likely an apartment crawl), and an after-party, complete with a professional photographer and DJs. Check their Facebook page to see if you made the photog's cut!

According to BYX brothers, “this ain’t your grandma’s Halloween party.” We’re not sure how often grandma throws down a worthwhile Halloween party, but we’re guessing BYX’s weekend soiree will eclipse it no less. We'd attend simply because BYX makes great use of the Stranger Things font style.

The PIKE’s at FSU are notorious for throwing good parties. Just do a Goolgle search for PIKE, FSU and party -- and go downt he rabbit hole. PIKE parties make the news because they're quite simply, a really good time (or at least, the stuff of blogs). So, it’s no surprise they made the list here. Never a shortage of ladies at their get-together’s -- just make sure you can get in.

Who says dental students don’t get down? DSD at Western U has been promoting their Halloween party for weeks leading up to the event. With a party bus making regular rounds to pick individuals up from campus center, DSD has pulled out stops to make sure their annual party is a hit.

Alpha Sigma Phi teamed up with Delta Zeta for the first annual “Haunted Trails,” an event that’s more than a party. Actually, we're not totally sure what it is, because so little information about the event is given. But we do know it's a fan favorite, with hundreds expressing interest in going. Designed as a fundraiser to support their philanthropy, Speech and Hearing & The Rain Foundation, you'll have to attend to know what it's about -- the least we can say is it includes a fantastic shirt designed for the fundraiser.