Where Should You Study Abroad? 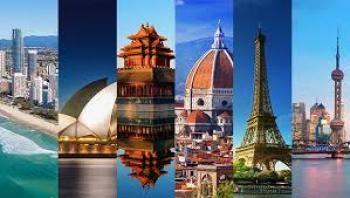 You’ve gone through half the battle if you’ve already decided to study abroad, and gotten buy-in from your parents (financial or not). Now what?

You get to pick where you want to go! For some of you, you very well may already have your heart set on a destination you’ve dreamed about since you were young. Click away now then -- this is for those who have no idea where they want to go, but they know they want to go… somewhere.

A lot of factors come into play when choosing your study destination. Consider these first.

How do you want to learn? Do a bit of cultural research before you dig in. Classes in Japan are set up very differently from those of Spain. Expectations for women in certain parts of the Middle East differ greatly from those of Australia. Understand what type of environment you’d like to be in when selecting your destination, and remember cultural and religious norms that dictate what the experience might be like.

How difficult will it be? Some countries make obtaining a student visa easy peasy. Others might not even require one. Still others will require a fair amount of documentation, and an even longer processing time. If it takes up to a year to acquire a student visa, and you’re trying to go this summer, you better have a backup plan.

How much will it cost? Studying abroad in Southeast Asia, Eastern Europe or South America will hit your wallet far lighter than studying abroad in Paris, London or Sydney. Consider the costs of the program -- but even more so, of the host country. If the program costs are cheap, but you’re in one of the most expensive cities in the world, you’ll blow your budget without expecting it.

Look at the costs of living in each country, coupled with the program costs, and understand what’s covered, what’s not, and how much spending/accommodation/transport and other daily costs might be. Factor it all in before you make a decision.

What about culture shock? If the idea of studying abroad excites you more than thinking about the plane ride over, waiting in immigration, finding your way around a foreign city, and all the other joys of studying abroad, rethink how much you really want to go out of your comfort zone. Doing a 180 and getting hit hard by culture shock for three of the six months you’re there may not be worth it. Do a deep dive into your own psyche and consider how uncomfortable you really want to feel.

Can you get a job there? Some might study abroad solely for the connections, networking, and leg up they may receive employment-wise within that country. Others might not even consider it, but find themselves decades later in their study abroad country having never left.

If you’re interested in living abroad long-term, post-graduation, take a look into what opportunities exist for employment of expats in your chosen field. If the field is dry, you probably won’t have much more luck in years once you graduate. Visit the employment playing field now to see if there will be any chance of longevity in your experience.