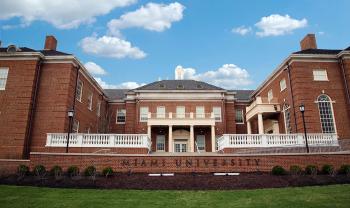 GreekRank.com derives its rankings from user-submitted votes. The Princeton Review takes a  similar approach -- let’s call it democratic -- by surveying students to develop their rankings for the colleges listed in their “Lots of Greek Life” list.

Students who attend schools that appear in The Princeton Review’s Best Colleges report were profiled and asked to share their experiences at the college, including their perspectives on Greek life. Read on for their rankings, and see where they placed on GreekRank.com. What Students Surveyed by Princeton Say: This private liberal arts college is considered one of the "Hidden Ivies," an insitution that provides an education comparable to that of Ivy League schools. It's also considered to be the university with the most active Greek Life in The Princeton Review’s ranking, yet only 32% of men join a fraternity and 48% of women join a sorority. However, Bucknell has found a place on many of TPR’s other lists, ranking #9 in “Lots of Beer,” #3 for “Party School,” and #14 in “Lots of Hard Liquor.” For Bucknell, that means that "the way most students fit in is by joining Greek life," said one student in an interview. Another student describes the student body as "very preppy, but all students are welcomed," and another as "a not very diverse but very open to diversity school!" See where Bucknell University ranked on GreekRank.com. What Students Surveyed by Princeton Say: The school so named because of the density of heavily forested woods that once surrounded it, Transylvania means "beyond the woods" in Latin. Once known as Transylvania Colony, it became what’s considered much of Kentucky in 1792. It’s small, and according to TPR, robustly Greek. The “huge Greek community’ tends to dominate the social scene,” the Review describes, and “there are ‘lot[s] of fraternity and sorority events to attend,’ with a large percentage of the student body involved in some form of Greek life whether that be a social or service frat/sorority." In numbers that’s over half: 57% of men join a fraternity and 56% join a sorority -- and note there are only 4 sororities! On GreekRank.com, we found TU had the lowest number of user submissions and discussions, and maintained the highest GreekRank.com review rating: a 73-75% average across fraternities and sororities. See where each TU fraternity and sorority ranked. What Students Surveyed by Princeton Say: With only a 25% acceptance rate, Lehigh isn’t the easiest university to get into. "’No matter what another student is doing, whether it be marching band, or joining a fraternity or a sorority, I know that every student on this campus is an intellectual,’” said one student interviewed by TPR. While over 150 different clubs and organizations make it easy to get involved, Lehigh is "big into Greek life." And that especially goes for men: there are 23 fraternities to 14 sororities. We found that at Lehigh, sustainability is also a big issue. The school’s “Campus Sustainability Plan” is making sure student housing is going green, “expanding sustainability programs from two residential halls to fourteen dorms and eleven Greek houses. Single-stream recycling collection is available in all residence halls, Greek houses, office and academic buildings, and throughout campus.” Check out LU on Greekrank.com. What Students Surveyed by Princeton Say: According to The Princeton Review, “‘diversity is a hallmark of the SDSU’s community…’ and simply put, life at San Diego State is ‘wonderful.’” Whether or not you opt to join Greek life, we’re assured you’ll find your place. With 22 sororities available and 26 fraternities, if you do go Greek you’ll have plenty of options. Keep in mind, however, that only 8-9% of the total student population enters Greek life -- and that makes sense for an enrollment over 36,000 students. On GreekRank.com, we noticed SDSU had the biggest difference in rankings between their sororities (coming in at 70%) and fraternities (60%). Check out SDSU’s active discussion community.

#5 University of Delaware in Newark, DE What Students Surveyed by Princeton Say: The UD student body has a lot of school spirit and is a welcoming bunch: "’Everyone is so friendly and nice, it seems impossible to think you would ever meet someone otherwise,’” reports TPR. Though UD is "’not very diverse in a sense of… ethnicity,’ it is ‘very diverse…regarding personality’ so ‘everyone should be able to find the right group for them.’" Greek life is "definitely prominent" and tends to be popular on campus, and some say "you can't go a single day without seeing a fraternity or sorority event or fundraiser." A #6 Party School, most students are from out-of-state (70%) and the majority female (60%). Don’t worry boys, you’ll have plenty of options for brotherhood in any one of the 32 fraternities on campus. Read one of the 18 reviews written about UD on GreekRank.com. What Students Surveyed by Princeton Say: Wofford College couldn’t be more family-friendly. When the weekend rolls around, you'll find the majority (50-55%) of the student body "’participat[ing] in Greek affiliated social events,’ and as one student put it, ‘Friday and Saturday nights are spent partying’ at the Greek Village, or at one of the numerous band parties the college throws, where ‘everyone will go and dance and hangout.’” If parties aren’t your scene and the spiked fruit punch doesn’t lure you in, don’t worry. “There are always student organizations putting on activities [such as]… bonfires with s'mores…and trivia night[s].” Bring mom and dad! Check out where Wofford falls on GreekRank.com. What Students Surveyed by Princeton Say: According to The Princeton Review, the vibe at TCU can be summed up with the phrase “southern hospitality.” Quality of life is high here, as TCU was ranked #3 for Best College Dorms. Undergrads at the school find their peers to be “‘friendly [and] welcoming.’ Many are also ‘football fanatics who…happen to be pretty smart.’” But looks can be deceiving. One student said that while “TCU is ‘big on Greek life, it can seem like everyone is a stereotypical sorority sister or fraternity brother.’” With 20 sororities and almost half of the student body joining Greek life (41-58%), it’s perhaps not hard to see why. Check out the active discussion community on GreekRank.com -- there’s over 20,000 threads! What Students Surveyed by Princeton Say: It’s a studious bunch, with a larger enrollment of almost 50,000 students. There’s a “heavy concentration on future careers,” meaning that most students intend to “‘become leaders in their field or profession,’ so ‘fraternity parties and formals are popular, but at the same time so are speeches from prominent members of the community and theatrical performances.’ Despite the fact it is located in the heart of Dallas, ‘the atmosphere is very calm and relaxing.’” On Saturdays, everyone is always on campus for the football games for "boulevarding (‘basically tailgating but on steroids’), and ‘we love to have alums come visit us for the tailgate,’ says a student.” The vibrant social life you’ll see is often due to the sororities and fraternities that are active at SMU. However, some wish there was “‘less emphasis on Greek Life,’ since ‘if you're not Greek, you can sometimes feel left out or looked down on.’” See what students say about SMU.

#9 University of Arkansas in Fayetteville, AR What Students Surveyed by Princeton Say: We’re down with “Fayettechill” and their outdoorsy culture, which some students ‘“would describe as a weird cross between Southern and hippie.’” Blame the stunning wilderness that surrounds the school’s location in the Ozark Mountains, providing ample opportunities for students to go hhiking, kayaking, rock climbing and more. But this is Razorback country, so football reigns on Saturdays, and you can look to the Greeks for some of the best pre-football social activities. Perhaps too much so, since according to one student, “‘the school is very centered around Greek life, so for some students it is harder for them to find their place outside of Greek life.’" However, only a fifth of total enrollment is actually involved in Greek life: 21% join a fraternity and 38% join a sorority. See which fraternities top the rankings on GreekRank.com. What Students Surveyed by Princeton Say: We’re interested in the picture-perfect atmosphere The Princeton Review describes Miami as having: “attending school at Miami University may be ‘the iconic college experience.’” Located in the charming and quaint college town of Oxford, Ohio, a “‘beautiful red brick campus,’ which students describe as ‘gorgeous’ and ‘astoundingly beautiful,’ the school ‘has a rich tradition and history’ that ‘is committed to its image as a premier undergraduate institution.’" High-achievers graduate to be high-earners from this school. Greek life is everywhere, according to one student who posits "it often seems as though everyone is [Greek] because of how visible they are on campus," though statistics indicate only about one-third of undergraduates go Greek. Lots of fraternities and sororities here -- see why MU is one of our most active Greek life schools on GreekRank.com.

Think your school should be on the list? Tell us on GreekRank.com!