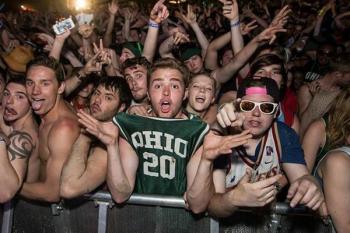 While you can find top party school lists across the internet -- with the Princeton Review being the authority on the topic -- we’ve consolidated student reviews across sites, including our own, to find out which colleges have the most active, fun, and boozy social scene.

Here’s GreekRank’s list of the top party schools this semester.

Tulane has kept a top 10 spot in party school rankings for years. What is it about the New Orleans-based university that keeps students voting it as one with the best nightlife, highest consumption of alcohol, and biggest social scene? The question almost answers itself, given the college town’s location in one of the “most fun-loving cities.” Lax liquor laws, an endless array of bars and establishments, and an embedded party vibe keep Tulane at the top.

Morgantown, West Virginia, is something special. With very little surrounding the town, it's seemingly in the middle of nowhere -- and with no direct airport nearby -- so WVU students find other ways to occupy their time. Factor in the size of their football tailgates, the record number of attendees at the games, and Fallfest, and it’s no surprise West Virginia University makes the rankings.

The University of Wisconsin still manages to make the list after holding a top five spot for years. The university still came in with high marks across Princeton’s rankings this year, including number three for “Lots of Beer,” first for “Best Health Services,” along with ranking highly for “Best Midwestern College,” and “Colleges That Pay You Back.” Something tells us UW students are living their best lives.

We’ll quote Society19 directly with why the University of Alabama has made the list: “So that’s why in the near future all you freshman will most likely find yourself hovered over a Tut bathroom while your friend holds back your hair, or hailing a golf cart on the strip to drive you and your intoxicated friends back to your dorm because you just remembered you have an 8AM tomorrow morning. Bama is no doubt notorious for its amazing parties, and nonstop fun atmosphere.” Noted.

To University of Delaware students, this one should come as no surprise. According to the editor-in-chief of The Princeton Review, Rob Franek, it's a position “the university has been flirting with for years.” The school’s active social scene ranks the highest for consumption of beer, liquor and drugs, as well as the most active Greek scene. Welcome to the top spot!

UGA has been gracing the top of party school lists for decades. The availability of beer and liquor, popularity of Saturday football games and tailgates, and active Greek scene -- coupled with the high number of hours students spend outside of the classroom -- has kept the Bulldogs at the top.

At IU, everything is a party. Basketball is the main event, the Little 500 is a riot, and fall season football activities bring a record number of tailgaters to town to participate in drinking activities. Forget the cold weather and trudging through multiple feet of snow for a party -- it'll be worth it.

Everyone loves Austin. The vibrant and young city has a never ending list of places to party, with a new establishment popping up each month. It's no wonder that once students graduate, they tend not to leave. The clubs and bars on 4th street, the parties at houses in the middle of nowhere -- Austin might as well be the city that never sleeps.