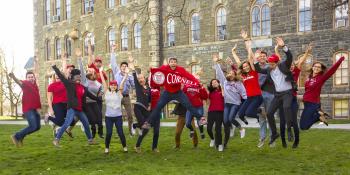 Does Your School Have The Most Popular Discussion Page?
Cara  9/19/18

At any given time, hundreds of college students are on GreekRank.com replying to discussion threads, up and downvoting comments, and responding to the most popular topics on campus and in Greek life.

What schools and Greek chapters dominant the conversation?

Here are the most popular discussions on GreekRank.com this month.

There’s plenty of advice for new pledges in the University of Illinois’ discussion board. And we couldn’t agree more with some of the wise ones who are offering it. According to user "guru":

“If you accepted a bid - get to know your hew house and some of the girls in it. You won't click with everyone single one, but there will likely be a few that could be your friends for life. Ignore the stupidity about "this top house is going down" etc. etc." or opinions made just on looks. If you like the girls in your house and want to have fun, you've made the right choice. That's all that really matters. If you end up not liking your house after giving it a chance - then you can drop it… Sorority life is rewarding and fun, but it's also what you put into it.”

Find all of the gossip on Bama’s discussion boards. From the latest in who’s dating who, to who pledged where, students use the discussion board to get ahead on what’s going on in Greek life. What houses date the most athletes? Why are girls wearing blue on gameday? All the answers are there!

University of Washington students use GreekRank.com for essentially that -- rankings. Their discussions are most often based around rankings, particularly the frats that “throw down the hardest” and the hottest sororities -- should we ask how accurate of a representation this of Greek life as a whole!?

IU is as much about the rankings as it is about reminding visitors not to take rankings and comments as truth. According to one alumni who posted, asking why tiers mattered: “I always found the tier system stupid. It divided greek life and kept fraternities and sororities from meeting each other.” Another provides advice, encouraging everyone to tank tier rankings with a grain of salt.

Penn State students are simply worried about making it into their preferred house. Discussion threads are largely based around the chance to make it into a greek chapter informally, options for what to do if you’ve dropped your bid, and how to rush as a sophomore. Find all of your last ditch advice here.

James Madison University appears to be a woman’s world -- you’ll find mostly discussion and comments from women and regarding sorority’s on this discussion thread. What each of the sororities are like, a slew of rankings, and what to expect for an incoming pledge class -- if you're considering a sorority, get the answers here.