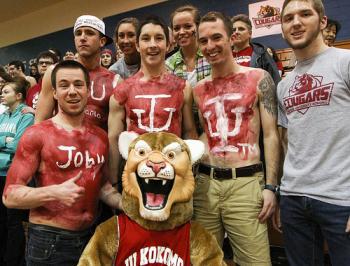 Most visitors who come to GreekRank.com aren’t here to browse the site. You, fellow Greek collegiate, are likely not interested in the latest srat rankings at a university you didn’t know existed. More often than not, you’re probably only here to scope out the discussions on your own school only. And fair enough.

But do you ever wonder which schools tend to draw the largest crowds? You’d be surprised to learn it’s usually not the largest, nor the ones with the highest number of students in Greek life. We have yet to crack the code to understand why some schools are more active on the site than others. Nonetheless, here’s the most popular schools on the site this month.

Tiers, tiers, tiers! Find gossip, news, and other non-ranking discussions elsewhere. IU is most always posting about the “most accurate” tiers, “real” tiers, “official” tiers, and our favorite, “flavor” tiers.

All parties here. Few rankings, in fact, since discussions are largely centered around who’s throwing down this weekend which parties will be the best to plan on.

Rankings here take a different turn. From the best looking girls and guys, to “frats on probation,” Ole Miss’ emphasis on rankings isn’t about the best sorority or the meanest girls. And then you’ll find the oddball discussion on what to do if your roommate cries every night.

Another refreshing break from only rankings-related discussions, Bama posts run the spectrum, from musings about why APhi is pronounced like “fee,” to understanding the hazing climate, to who pulled off HOCO -- wait, what’s HOCO?

Find helpful advice and wise words from Penn State students. We particularly liked one highly voted piece of advice: “FRESHMAN DON’T SIGN LEASES. If you are going to rush next semester, don’t sign an apartment contract so you’ll be able to live in house next year.”

Where to go this weekend? Look to Arizona discussion boards to see where the best Halloween parties will be, or what to expect for homecoming.

Not into gossip? You’ll have to really scroll here. If you don’t know who’s who at USF, the topics up for discussion are going to fly over your head.

Questions get asked and questions get answers on Arizona State’s lively discussion. What happened to this frat, what frat throws the best parties, what advice do you have for rushing? Worth a look even if you don’t go to ASU.

We love the positivity at UCLA. It’s not about worst frats or meanest srats, it’s about the nicest girls and the hottest guys. Trash-talking is replaced by top houses, tallest guys, and best pledge classes.