How To Be The Healthiest Version Of Yourself This Season 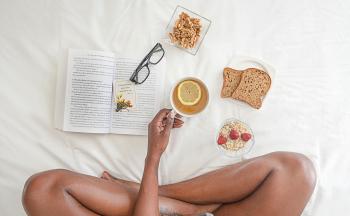 Here we go. Get the leggings out, the bulky hoodies (but don’t forget you’re still an adult now), the oversized sweaters. Thanksgiving is around the corner and Christmas is trailing behind it. And somehow, even though Halloween was designed for kids, you still pummelled through too much candy last month.

How can you prep yourself mentally and physically to make it through chubby season resembling your skinnier, summer self?

Here’s one tip you won’t believe: skip the gym. That’s right. The healthiest people alive aren’t shredding huge weights and spending hours on treadmills. The healthiest people probably have no idea what Orange Theory, CrossFit, or PureBarre. In fact, they’re too busy consuming healthy fats right now to pay attention to anything going on in the fitness and health world.

The longest-living people in the world -- those who live in “Blue Zones,” the so-called blue circles researchers drew to identify the first places on a map where people live the longest -- don’t join gyms.

Instead, write the authors behind the book about Blue Zones, “they live in environments that constantly nudge them into moving without thinking about it. They grow gardens and don’t have mechanical conveniences for house and yard work.”

Box jumps aren’t natural. You’re going to eventually hurt yourself. Find ways to be physically active that are in alignment and complement your daily lifestyle.

But when your daily lifestyle involves spending much of the day tied to a variety of screens, it’s hard to rationalize making time for gardening, walks, or manual labor. So how can you add ways to move naturally to your daily routine? Use a more active mode of transportation. Do you usually take the bus to class and around campus? Nix four wheels for your two legs or a bicycle. Vow to limit non-active transportation to the farthest jaunts you need to take. If that’s not possible, see if you can build in time for a 30-minute walk every day.

The American Cancer Society recently published in a study that walking for at least six hours a week lowers your chances of dying from cardiovascular disease, respiratory disease, and cancer. Even two hours of walking a week still had similar effects in reducing illness. And better yet, it’s good for the mind. Walking not only releases feel-good chemicals, but it can reduce your risk of dementia

Speaking of lifestyle, that’s how you should be eating. The way you eat is your lifestyle, not a diet you’ll drop next month for the next big fad. There also shouldn’t be guilt and shame attached to eating habits. Those who live in Blue Zones typically tend to drink alcohol moderately -- 1-2 glasses of wine a day -- and generally eat healthy, not with some specific restrictions in mind. The diets are usually plant-based, with meat (usually pork) eaten on average only five times per month. Serving sizes are small, and usually composed of beans and lentils. Avoiding processed foods is another big win for Blue Zone communities.

So instead of spending all the money you don’t have on expensive lean-body protein powders, home delivery diet kits, or the slew of other products marketing to you promising your healthy self, make these small changes for the most impact long-term. Sure, you might still find you put on a couple of pounds through the winter, but by incorporating some of the Blue Zone habits into your day-to-day that is easy to maintain long-term, you’re setting yourself up for a longer, healthier life in the long-term.