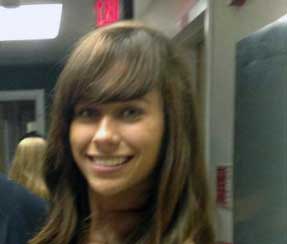 So by now I’m sure most of the Greek scene has read or at least heard about the expletive laden email from good-looking University of Maryland Delta Gamma sister Rebecca Martinson. Some have called it classless, crazy, tasteless, derogatory, cruel, and rude. But I beg to differ. Here’s why
:

1. It’s Helpful – Do you ever think back to a time in your life when you wish you would have participated more in an event or a social activity? You may say to yourself: "Maybe I would have a boyfriend right now instead of watching Bravo all day if I was as social as Rebecca was at the New Years Eve party." Rebecca Martinson-esque people are out there to make sure this thought never crosses your mind. Two of the most important things you learn in Greek life are getting out of your comfort zone and being more social. These qualities carry their benefits well into your professional career when you consider networking and office politics. If she had asked nicely, the girls probably would have continued their boring ways.

2. Taking Command – Talk about leadership skills. What have they been teaching you since you were 5 years old? – Never be afraid to raise your hand and say something in class because everyone is usually thinking the same thing. The leaders are the ones who open their mouths and get things done. Do you think Bill Belicheck or Jim Harbaugh aren’t reaming their players out after an effortless loss? Rebecca has already received a job offer with her only resume being the open email. I’m sure they’re not expecting "being a follower" to be one of her weaknesses.

3. It’s Funny – Say what you will about Rebecca Martinson’s email, but you can’t say it’s not funny. There’s a reason several well known celebrities decided to recite it word for word on video. In addition, over 130 articles can be found on Google News about this story. With phrases like c**t punt, ass hats, and goddamn b*ner it’s an instant classic. Having said that, she could have done without the homophobic/albeistic slurs.

4. It’s Honest – If what Rebecca Martinson said is true and all the Delta Gammas did during Greek Week was "stand around and talk to each other and not [their] matchup," then they did need an honest wake up call. Her proposed "reality check" was correct, no one likes to hang out with a group of girls who only talk amongst themselves. Even on an individual basis, no one wants to be friends with a boring person. This is human nature, nothing more and nothing less.

5. It wasn’t THAT bad – As much as some may think her verbiage and tone were extremely hurtful/rude I have seen MUCH harsher emails sent between fraternities, sororities, and friends. The worst of the worst include calling out individual people, i.e."Katie no one in our sorority likes you how did we let ugly losers like you in? You were so weird at last night’s party." These kinds of emails are rare in Greek life but they do exist. They are usually followed up by an apology and other members defending the target of the email, but by that time the damage has already been done. Rebecca didn’t call out individual people when she could have, props.

Sadly, these reasons were not understood by the masses and Delta Gamma has plummeted in the UMD Sorority Rankings. I used basic logic and reason in my positive assessment of her email. Do you agree with me? Let me know in the comments below.

Read the full story at Gawker.