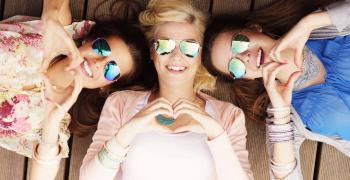 It’s spring semester! You’re nearing finals, more focused on beach week, and lining up internships for summer break. At GreekRank, we’re pulling rankings for the top sororities and fraternities in the country.
Since we’ve consolidated categories and changed our rankings, they may not look the same as last fall -- we no longer rank Sisterhood/Brotherhood, Involvement, Classiness, Popularity, Looks and Fun. Rather, we’re ranking by two simpler, more democratic categories: the Largest and the Top-Rated sororities and fraternities. Here’s who topped the list for spring 2018. TKE is one of the largest fraternities not only by GreekRank records, but in North America, with over 272,000 initiated members and 235 active chapters and colonies. We’re happy to see those impressive numbers tied to an organization with the mission, “TKE Builds Better Men for a Better World.” Their most popular chapter? Keene State College in New Hampshire, with 29 ratings on GreekRank.com. The sisters of Alpha Omicron Pi come in as the largest sorority, with a similarly forward-thinking motto of “Inspire Ambition.” Find them on social media with equally large followings -- check their Facebook, Twitter or Instagram -- these girls have tens of thousands of followers and likes. With a whopping 566 ratings, their Indiana University in Bloomington ranks as the most popular chapter. Perhaps it’s due to their reputation as being one of the most good-looking sororities! There’s no question Alpha Phi Alpha is one of the largest fraternities (including cultural and honors) -- they have 706 chapters and 200,000+ living members (and over 850,000 community service hours worked, a key part of the organization’s philosphy) -- with history to boot. The organization describes itself as one whose members led the Civil Rights Act, led the charge in the historic court case Brown v. Board, and founded and supported institutions such as the National Association for the Advancement of Colored People, The Crisis magazine, National Urban League and the National Association of Black Journalists. Go Alpha Phi Alpha! The salmon pink and apple green colors that define AKA make the sisters stand out, if its 958 chapters nationwide don’t already. With historic beginnings -- its founders were among the fewer than 1,000 African-Americans enrolled in higher education institutions in 1908 -- AKA lives by the credo, “To be supreme in service to all mankind.” With only three fraternities and three sororities listed at Carthage College, its Delta Upsilon fraternity manages to sink the top-rated spot on GreekRank.com -- it lacks any low rankings, a key factor in how well a fraternity or sorority performs. No surprise though: Delta U is actually the world's oldest, "non-secret, non-hazing" fraternity. Congrats to Delta Upsilon for consistent high ranks and a worthwhile ethos! The Delta Psi Delta sisters’ 97.4% ranking puts them at the very top of our list -- consistently hitting perfect 5’s in ratings -- and even reaching 100% in our Friendliness poll. Like their top-rated brothers at Delta Upsilon, they similarly received little if any down votes, keeping their percentages up. The Delta Psi Delta sorority is one of the smaller sororities nationally, with only five chapters, but as important as any: this is Canada’s first national sorority. Congrats!