Are You A Good Leader? 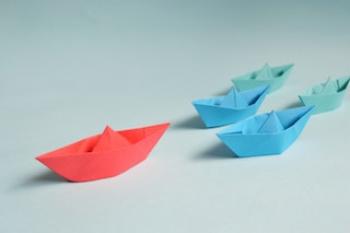 Because it's not really something you think about -- or likely something you’ve been able to really try out -- until you’re officially adulting. Up until now, leadership has looked like holding positions within your sorority or fraternity chapter, being a captain on a sports team, or an executive committee member in an extracurricular or college club.

Not to diminish the importance of all of these occasions to “lead,” instead, we’d like to offer more, to “round out” what a leader means based on real life scenarios you’ll encounter as you enter the workforce -- and how to start building the mindset and skillsets that will make you a great leader.

Do you know what you’re good at? Great leaders know where their strengths and weaknesses lie, and work to fill in the gaps -- or hire those who can pull the weight for them. It’s not always about being the best at everything, but knowing what you can excel at, get better at, and what is better left to an expert. Once you understand this, you can become a manager, and learn to recognize this in the people who work for you, helping them build their own capacity, or infilling with talent where necessary.

Can you motivate? People get behind leaders who have a compelling vision, and are able to communicate that clearly. If you haven’t yet answered your “why” -- your ability to understand what motivates you and provides you purpose -- you’re going to have a hard time convincing someone else to get behind your cause. If you can provide a motivation for others that they’re able to internalize, called intrinsic motivation, which creates a desire to achieve, you can rally a team.

Can you lead by example? The best leaders aren’t known for their ability to bark orders. The best leaders demonstrate how they themselves can get the job done, and man the ship on their own if they need to.

Are you a diligent goal-setter? If you haven’t even thought about setting goals for yourself -- personally, academically, physically, or other -- you’ll have to pick this habit up stat. Goal-setting is a key characteristic for anyone in leadership role (or a professional role, period!). How are you holding yourself accountable to progress? If you can’t do it for yourself yet, you won’t be able to do it for a team.

Ace at time management? Procrastinators, listen up. It’s not a healthy habit to indulge in now, and it’ll only get harder to quit as you get older. Time management -- knowing what your priorities are and budgeting time for them, whilst reducing noise, busy work and distractions -- might just be the key to successful leadership. There’s no way Steve Jobs or Elon Musk got into their roles by scrolling without end through Instagram, or binging on Netflix series most weekends. Organize your time, create an agenda, and hold firm to it. This is your opportunity to flex those discipline muscles.

Familiar with delegation? This was is hard when you’re still working towards a degree and the majority of your experience on a team is about shared work and responsibilities. But as a leader, it’s critical you can delegate, and know how to do it well -- without offending anyone, without stepping on toes, and without coming off as rude.

Overly familiar with collaboration? Greater than your ability to network is your ability to collaborate and work as a team. Note “leading by example.” Can you cultivate an environment where everyone feels heard, respected and valued?

Are you growth-oriented? Ever heard of the growth mindset? Very different from a fixed mindset, and oftentimes, this is something that is drilled into us since we were children. If you were told you were perfect and smart through your entire childhood -- or if you were told that you were the exact opposite -- you learned to believe that you, as a person, were one way or another. That’s a hard mindset to move away from. But if you were told, as a child, that you did well when you worked hard, and your work ethic was complimented (not your natural intelligence which you didn’t have a say in), you likely have a growth mindset. It’s the idea that you are in more control over your circumstances, and you have the ability to change anything you’d like to improve. Because EVERYTHING can be improved.

Is communication the sharpest tool in your belt? Communication is by far one of the defining characteristics of great leaders. And communicating effectively is a seemingly easy trait, though few do it really, really well. That’s because it takes more than what meets the surface: you need empathy, compassion, etiquette, respect, modesty, and a slew of other related adjectives to communicate well and build strong interpersonal relationships. If you haven’t already (!), learn how to listen, and study what’s involved in two-way feedback. Be open to receiving feedback from others -- even if it may be hard to hear. And always avoid being defensive: it’ll trigger the worst reactions across the board.

Be positive. Just because.