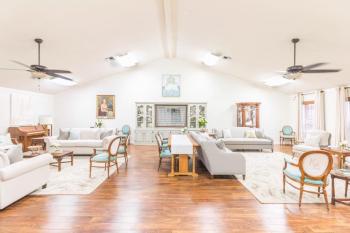 These 7 sorority houses will make you rethink how your “Maintenance of Chapter House” dues are spent.

Sorority chapter dues are a necessary and sometimes expensive part of being a member of the organization. In exchange for sisterhood, loyalty, and rituals, you’ll often have to fork over thousands of dollars. Dues go to the national organization and the chapter branch, and are used for everything from administration fees and social events to beer coozie’s and glitter.

But for these sororities, shelling dues to hire top-notch interior designers to cozy up their chapter parlors made sense -- and we can’t disagree. Gold accents, a palette full of neutrals and floor-to-ceiling drapery made the ADPi house at UC Davis stand out, but designing a living room that would allow a seat for every sorority member -- and enough space for everyone to move during recruitment -- might be more impressive. ADPi brought in Georgia-based designer Grayson Pratt, who did most of the design work based on viewing the house from video before flying in for the final install. Delta Gamma at the College of William & Mary

Going for less princess and more modern, the Delta Gamma sisters' living room at William & Mary was spruced up with blues and neutral tones in this revamp by Nicole Rutledge Design. To hide closet doors that were an eyesore, Rutledge added striped curtains as a solution. More of the house is getting an overhaul with study spaces and the kitchen also due for a redesign. Peony and antique rose photos on the wall, antelope rugs on the floor and quartz and gold leaf tables to accent -- the KKG house called on interior designers and carpet specialists to pull together their living room. Eatman’s Carpets and Carole Hollowell Interiors designed both the inside of the house and the exterior, adding ornate black benches and rocking chairs to the porch. Chi Omega at University of Virginia

The Chi Omega girls at UVA opted to have not just their communal and dining spaces redesigned, but dorms, suites and bathrooms as well, outfitted with custom bunk beds, specialty tiles and hot pink sofas. With the ChiO house still under construction during installation, designer Rachel Bishop was starting from scratch (and installing pieces with little operating AC in 95 degree heat). Alpha Phi at the University of Arizona

Renovations at the Alpha Phi house at UA earned the sorority house's designer, Raegan Ford, a nod in the Phoenix Home & Garden Magazine. The designer used pops of color, replacing drab browns and sloppy pillows with bright pinks, turquoises and accessories throughout. Delta Gamma at University of Kentucky

Interior decorator Erica Wilhemi at PDR Interiors is used to meeting the demands of sorority house renovations, having completed installs at Ohio State, Michigan, Washington State and other schools. Returning home to UK, she renovated the DG sisters’ living room, which was dated, dark and poorly lit. Being mindful of the sorority’s colors and branding, Wilhemi wove in anchor symbols, pale pinks and blues in the drapery, rugs and accent pillows. Kappa Delta at University of Louisville

The KD chapter room at UL was outfitted with custom art and monograms by a team of designers from Paige Gary Designs in a complete renovation, with “KD” etched on the back of each chair and touches of Tiffany blue throughout.