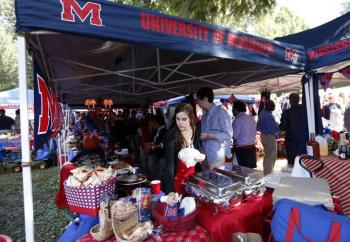 Tailgate At University Of Mississippi
Sarah  12/23/17

Fall semester is over and bowl season is upon us. In schools with big football programs, fall semester excitement moves from rush week to Saturday tailgates. Let’s take a look back at this last semester’s football season and crown the top 10 best college tailgates. Via USA Today
LSU
Why? Because Sports Illustrated said so. Andy Staples went on-assignment to cover a Saturday in the life of a student at the home of tailgating national champions. And what he learned is that at LSU, it’s a numbers game: tailgates can house 30-year old daiquiri machines, flounder through dozens of liters of liquor bottles per tailgate, and leave about 20,000 tailgaters unaware there’s even a football game going on. Via USA Today, AP Photo-Rogelio V. Solis
Ole Miss
A “Walk of Champions” arch was erected to honor gameday walks by coaches and players through the university's now-designated tailgating spot, The Grove. The 10-acre expanse of campus bans cars and has been called by the New York Times to be one of the “most raucous and distinctive tailgating parties in the country.” We trust their sources.

Wisconsin
The school devised its own rendition of the wave, and the student body in the stands is incredibly active even after eating all of those brats. Watching the entire stadium Jump Around fiercely for a quarter of the game will put the scene your school makes when “Sandstorm” comes on to shame.

Via LA Weekly
USC
With a full football season of great weather, the University of Southern California is hard to beat. And with USC’s new rule to defer recruitment of freshmen into fraternities and sororities until spring semester (or after students have completed at least 12 units at USC), college football Saturdays may take on an all new importance. We can only guess that the excitement and parties usually associated with rush activities will funnel into fall football tailgates.

Via Susquehanna Life, Penn State
Penn State
With a fan base that swarms a place called Happy Valley, and a stadium the main focal point of a city called State College, Penn State is a powerhouse in the fan endurance game: almost 107,000 fans make it into to Beaver Stadium weekly. Given the frigidity of winter in the region, we’re impressed.

Via SC.edu
University of South Carolina
With one of the University of South Carolina’s faculty considered a foremost researcher on tailgates declaring the school as one of the best places to tailgate in the nation, this spot goes to the Gamecocks. Andy Gillentine is a professor of sport and entertainment management at USC, and began “doing research on tailgating 20 years ago.” His findings? “What people want is that sense of community,” says Gillentine. “It's this big open house feel.” No surprise there.

Via SBNation.com
Alabama
A unique list of tailgating traditions found nowhere else (and one of the nation’s best football programs) puts Alabama in the rankings. In addition to the school’s colors of crimson and white, you’ll see the traditional houndstooth pattern adorning tailgate decor and dress. You’ll find a “yellowhammer” in the hands of many -- a signature cocktail named after the state bird. And everywhere, you’ll hear what’s considered the most well-known college battle cry: “Roll Tide.”

Via Pinterest.com
Tennessee
With Neyland Stadium located next to the Tennessee River, you have a different breed of fans: the  “sailgaters,” those who dock their decked out boats next to the stadium, link up, and party on water. On Saturdays, almost 200 “boat-gaters” take to the river for gameday and band together as the Vol Army.

Via OregonLive.com
Oregon
With the so-called loudest fans in the country, the University of Oregon is a top ten tailgating destination for the excited atmosphere, rain or shine. And if it is rain, no sweat: the University opens the Ducks’ indoor practice facility to hold up to 5,000 tailgaters before games.