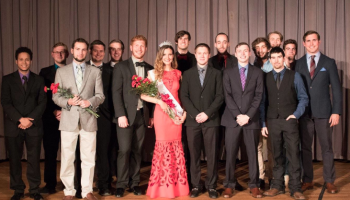 Miss Greek pageants are happening this time of year at colleges across the country, and we’ve funnelled the list down to five of the most popular, highest-raising, oldest-running, largest pageants and more.

The DTD chapter at the University of Florida holds their Miss Greek pageant with a goal of donating over $25,000 to the American Cancer Society and the Juvenile Diabetes Research Foundation each year. Their event typically draws over a thousand women from the school’s sorority community, and includes five different portions: fundraising and attendance, a personality walk, a chosen talent, a philanthropic statement and an impromptu question in the final round. Scholarships are awarded to the overall Miss Greek winner, the overall top fundraiser, and the overall talent winner.

According to pageant coordinator David Walsh, "the origin of the pageant is what makes it stand out.” Walsh says that about a decade ago, “one of our brothers, Logan Need, contracted cancer. Miss Greek was started to help support our brother, and to raise money and awareness for a disease that has impacted us all in one way or another. I think it is amazing that in a difficult time, the Greek community really came together to become involved in our philanthropy and help one of our brothers".

The Tau Kappa Epsilon Fraternity just held its 10th annual Miss Greek beauty pageant last month to raise money for St. Jude’s Research Hospital. TKE goes all in when it comes to fundraising. The fraternity sets out on foot, visiting each student organization on campus and going door to door around town, with Wing Stop and Posedena as some of their biggest donors. The pageant itself is similar to most typical beauty pageants, and according to fraternity president Dillon Hendricks, “consists of three parts, the stitches wear, which takes the place of the casual [wear], a talent portion as well as a formal portion.”

IU’s Miss Greek Pageant raises funds for cancer research, along with each contestant's chapter philanthropy. The event is widely-promoted and well-known, having gained publicity across Facebook and numerous media sites. With the numbers finally in after their April 8th pageant, winnings totaled $231,878, the highest amount we’ve seen from a Miss Greek pageant this year. Funds go to The V Foundation for Cancer Research, which was formed by ESPN and legendary basketball coach Jim Valvano. Congrats to 2018’s winner Olivia Wagner, this year’s crowned Miss Greek!

The Greek pageant at Penn State is not hosted by a singular fraternity but inclusive of all sororities and fraternities, as it’s held as one of the main events during Greek Week. Like other pageants, Penn State’s was made up of three parts: formal wear, talent and questioning. But instead of formal wear, contestants (both women and men) take on an even more “Greek” tradition, parading down the stage in handmade togas. A Mr. and Mrs. Greek God and Goddess are crowned at the end of the pageant, with each winner taking home a $500 scholarship awarded by the Interfraternity Council. This year, junior Stefani Pappas of Sigma Alpha and Brandon Derzinski of Delta Lambda Phi won Ms. Greek Goddess and Mr. Greek God.

DTD will hold the University of Washington’s annual Miss Greek Pageant this year, one of the largest student-held philanthropic events at the university -- and maybe one of the oldest, as it goes into its 32nd year. The fraternity hopes to raise $150,000 that will go solely to Cancer for College scholarship recipients who are from or attending school in the Pacific Northwest. This year, Alpha Chi Omega Tori McGowan is in the lead for Miss Greek with almost $5,000 raised on her behalf.