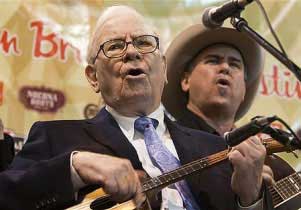 Fraternities are filled with some of the most ambitious and overachieving people in the world. While movies like Animal House tend to portray fraternity brothers as nothing but raging alcoholics, the reality is much different. We take a look at some of the richest and most successful fraternity men today
.

While there is an endless list of successful fraternity alumni, we are going to focus strictly on the absolute heavy hitters. Ones that literally, by themselves, are global powers.

Warren Buffet | Alpha Sigma Phi
University of Pennsylvania - Berkshire Hathaway - Over $55 billion
Warren Buffet is a prominent investor and consistently touches the Number 1 spot on Forbes Richest. People who have believed in his vision and invested in his company have become billionaires themselves.

Charles Koch | Beta Theta Pi
MIT - Koch Industries - Over $30 billion
Charles is one of the famous Koch brothers. His company, Koch Industries, is involved in a variety of different industries in dozens of countries around the world.

David Koch | Beta Theta Pi
MIT - Koch Industries - Over $30 billion
David, Charles' brother, also owns a significant share of Koch Industries. They both inherited the business from their father and took it to new levels.

Sam Walton | Beta Theta Pi
University of Missouri  -  Walmart/Sam's Club  - Over $25 Billion
Walton's ambition and entrepreneurial skills led his family to become one of the most wealthy and well known in history. The business he founded, Walmart, continues to break records in retail revenue and sales.

Michael Bloomberg | Phi Kappa Psi
Johns Hopkins - Bloomberg LP - Over $27 Billion
Bloomberg started one of the largest news corporations in the world. He eventually went on to become the Mayor of New York City.

Mark Zuckerberg | Alpha Epsilon Pi
Harvard University - Facebook - Over $18 Billion
Mark Zuckerberg can be called the father of social media. After Facebook's stock initially nosedived, it's now back up to record highs, making Mark richer and richer every day.

Paul Allen | Phi Kappa Theta
Washington State University - Microsoft - Over $15 Billion
Allen was instrumental in getting Microsoft off the ground.

Phil Knight | Phi Gamma Delta
University of Oregon - Nike - Over $14 Billion
A true baller, Phil Knight co-founded Nike and built a brand that is known the world over.

As of right now Michael Bloomberg's fraternity, Phi Kappa Psi at Johns Hopkins, has the highest rating of all. It would be interesting to know if anything from their greek life experience contributed to their success.