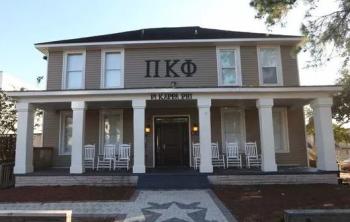 Suspensions, hazing, movie deals. It's been a crazy week in Greek life around the country. Here are the biggest fraternity and sorority headlines.

DA To Announce Results From Penn State Investigation
Results into the death of a Beta Theta Pi fraternity pledge are scheduled to be live-streamed on Monday, November 13th.
Timothy Piazza, a 19-year old student at Penn State University, died February 4th from a fractured skull and other injuries after a night of drinking. Piazza reportedly drank a dangerous amount of alcohol at a pledge ceremony and fell down basement stairs at the Beta Theta Pi fraternity house. It wasn’t until the morning after that an ambulance was called, and the student was pronounced dead.

Fourteen former members of the now-banned Beta Theta Pi fraternity face criminal charges in connection with Piazza's death. The results into the investigation include info on the deletion of security camera footage at the frat house from that night, which were allegedly erased by one of the members of the fraternity.


Greek Life Bans: “What About The Sororities?”
Meanwhile at Florida State University, questions are being raised about whether or not sororities should be included in the school’s recent indefinite suspension of all Greek life. A report had been released last year that said FSU was responsible for the state’s highest number of hazing incidents and other Greek Life infractions. While the report included both sororities and fraternities, most of the incidents were fraternity-related.

FSU President John Thrasher, who implemented the ban, grouped the Greek community as a whole stating, “For this suspension to end there will need to be a new normal for Greek life at the University.”

Schools across the country are implementing similar bans.

“The Culture of Hazing”
A look at Greek life hazing shows it pre-dates U.S. fraternities, writes John Hechinger, author of "True Gentlemen: The Broken Pledge of America’s Fraternities.” Hechinger says hazing is an inherent part of a fraternity’s culture.

"British schools had a tradition of freshmen being viewed as sort of second-class citizens," suffering abuse at the hands of older students, and "this was brought over to American colleges," he tells ABC News.

So how can we stop the cycle that’s resulted in numerous deaths this past year? Give more power to the national system, says Hechinger, and get rid of the alcohol.

Easier said than done? Not for Ball State.

Ball State University Goes Dry
According to ABC News, Ball State University's 13 fraternities have sworn off alcohol at their parties for the next three months. Frat houses and co-hosted events made a decision to go dry until February 1st. Fraternity presidents and the school’s Greek Life staff are hoping to “take a stand and show leadership, signing a joint letter with the university," said a university official. "It’s not one single incident that has caused this."

Elsewhere In Florida: UCF Fraternity Lambda Chi Alpha Now On Netflix
A BBC documentary on the “keg-tossing, hard-partying culture” of University of Central Florida fraternity Lambda Chi Alpha is now streaming on Netflix. The documentary, called “This World: Frat Boys,” follows a group of students during the pledging process of the former UCF frat Lambda Chi, which is now an unofficial, unsanctioned, off-campus fraternity called the Gazoni Family. The group unbranded themselves from the Panhellenic Council, and prides themselves on their “no rules” attitude.

According to the Gazoni Family Instagram, the benefits of joining the unregistered student organization include unlimited socials, unlimited date functions and unlimited house parties.

Not To Be Undone: Netflix Steps In To Land Sorority Comedy
Netflix acquired the rights to release “Step Sisters,” a comedy about an ultra-ambitious African American college senior and Theta sister headed to Harvard Law. All she needs is her dean’s endorsement, but in return, she must cross cultural lines and teach a wild, party-obsessed white sorority the exclusive art of black stepping.

The release is scheduled for January 2018.

Join A Frat, Boost Income?
Send this one to your parents.

A new study by economists at Union College in Schenectady, New York, shows that being in a fraternity may lower members’ GPA by an average of 0.25 points, but may raise their future income by as much as 36%.

How? According to the report, while frats may have a reputation for drinking and partying, being in one can provide academic support and boost your social capital and connections, "which more than outweigh(s) its negative effects on human capital for potential members.”

Following the resignation of President Trump’s press secretary Sean Spicer, Perino said that you’ll find few press secretaries who will criticize each other.

“It's really quite remarkable,” said Perino in a Business Insider podcast. “Partly because you just know what it's like to be up there and, you know, walk a mile in her shoes before you criticize."