Colleges With The Best Student Housing 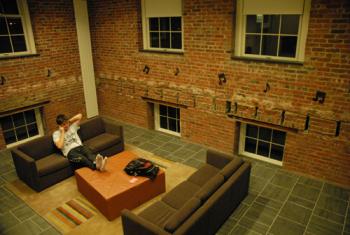 Does Your School Make The List For Top Student Housing?
Cara  7/16/18

Funny thing about freshman year dormitory halls these days: they’re often nicer than anything you can find off-campus or in the Greek village. Which schools are worth attending just for their swanky student housing?

GreekRank.com’s list of colleges with the best student housing looks at cost of housing, amenities, views, year built, and overall quality. While Greek housing tends to lead the lineup for best places to live on-campus, these schools may keep you wanting to stay in your frosh dorm forever.

High-rise, high-profile, StuVi2 is considered the crown jewel of BU’s campus, and a “towering symbol for a city with a love-hate relationship with its expanding universities,” says BU Today. “The physical structure, all 26 stories, makes a statement: one can see in it a message of sustainability, aesthetic beauty, over-the-top luxury, or simply the Next Big Thing in undergraduate life,” the student paper goes on to say. And elsewhere? The Boston Globe called it “perhaps the most opulent residence hall to ever grace the local college landscape.”

The nicest (and most innovative) hall award goes to MIT. Their “Sponge Hall” is huge, housing over 300 students, so it makes sense they’ve also built in something called a “ball pit.” Along with their own government structure, the hall features a unique social "lounge" structure where politics, open house meetings and proposal meetings can be conducted.

At this private, Methodist school in the North Carolina city of the same name, 97% of students said that their overall dorm quality was great, according to Niche.com. What does that really mean? An overall low-cost of housing (under $6,000), with adjacent, superb dining facilities, walls that smell of fresh paint, and our favorite -- stain-free furniture.

You’re here for the dining halls. Both McMurtry College and Duncan College dormitory buildings have their own cafeteria — and better yet, it’s freaking gorgeous. Along with prefabricated bathroom pods, which featured plug-and-play connections to hook them into the building's utilities, the buildings put sustainability first throughout their design.

At 1300 Residence Hall, it’s all about the amenities. The gigantic dorm hall (1050 students in a five-story building) features its own fitness center, computer lab, a large reception area, plenty of meeting rooms, and spacious student lounges. We’re biased towards the private bathrooms.

Nicer than some (read: most) apartments, the Bowdoin Stevens House Dormitory is one of the smaller dorms (note the word “House” in its name), and while it looks classic from the outside (note it was originally built in 1860), the inside has been completely retrofitted. We’ll guarantee that the 35 students who get to live here are in better accommodation than any brand new building down the street.

NEW! Should You Study STEM?
Request