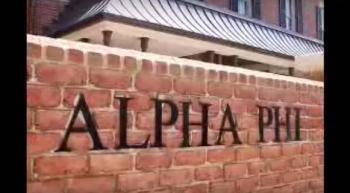 Greek Life Should Use This Opportunity
Lisa  8/18/15

After a few major news networks covered it, I got a call from my parents asking what the deal with the Alpha Phi recruitment video was. "Is this what you do with your free time? Run around in your bathing suits? Is this what we let you sign up for?" asked my mom, who never had a chance to be a part of a sorority.
And that's part of the problem: as cliche as it sounds, if you haven't had a chance to be a part of Greek life, you aren't able to have a complete understanding of what it's like.

Part of it is the legacy and secrecy that comes with being a historic society. Part of it is the same as being a part of any organization that requires active involvement and constant interaction with its members (for example, people can guess what it was like being a part of your track team, but no one really knows how the camaraderie and memories made high school awesome). Despite this, I've seen hundreds of responses to the Alpha Phi video by people who believe that they "know what's best", and go so far as to blatantly insult the Greek women in the video. The fact that a recruitment video has made national coverage is ridiculous.

However… we can use this news coverage to our advantage.

Hear me out. For years, Greeks have been figuring out ways to deflect the stereotypical comments of "oh, so you pay for your friends? oh, so all you do is drink?" by either ignoring the haters or shoving philanthropy numbers into the faces of said haters. But at this point, that's not really the problem. Yeah, the women in the video are having fun. That's not exclusive to their video though- the majority of recruitment videos gravitate along the lines "oh we just love our sisters so much" which is fine, but that's not the only thing we're about. And while "fun" will bring in a good amount of new members, it's not going to attract women who want to be involved in philanthropy, in service, in leadership.

Basically, what I'm saying is that I want to see more recruitment videos with women volunteering and raising money. I want to see more homage to your founders and to your values. I want testimonials about how being the president or VP of your chapter has helped you become a better leader in both your life and academics. And this doesn’t just apply to recruitment videos, but how we act as individual members and as entire organizations. As members of Greek life, we are exclusive because we hold ourselves to a higher standard, and we can start doing this by acting like it, not just telling people that we do. The media covers so much of what we do wrong, and we need to counter this by showing what we do right.

When you’re going through recruitment this year, focus on who you are as a chapter and what kind of men and women you really want wearing your letters. Yes, there will always be people that are against it, but it’s hard for them to argue when we show, not just tell, them how much everyone benefits from Greek life.

When my mom asked me about the video, I took a deep breath and said, "I joined because Greek life makes me a better student, sister, and person. Having fun is just an added bonus."