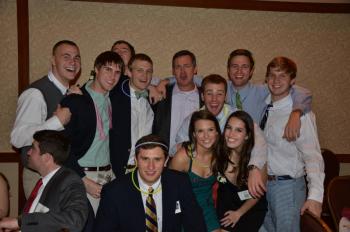 Which Fraternities Won At Philanthropy This Semester?
Tracy  6/8/18

With so many undergraduates joining fraternities and sororities, one thing is for sure: that’s a lot of bodies. And, a lot of potential to do good. Hence, most chapters across campuses have their mission rooted in some kind of philanthropic effort. Each year, chapters devote time and attention to planning a fundraiser to raise money for their philanthropy.


Here’s our list of the top five fraternity philanthropy events that took place this year.

The Pike’s at Duke raised a — wait for it — whopping $80,000 this year through their fundraiser, now in its third year. The fundraiser honors two brothers, Bobby Menges and senior Mark Schreiber, who had been diagnosed with cancer. Schreiber is currently in remission from central nervous system germinoma, and sadly, Menges died from cancer as an undergraduate in September 2017. The premise of the fundraiser is to raise money by shaving hair in solidarity, and this year, it expanded to include a blood drive and a hair donation program.

“This year, we started planning before Thanksgiving, even though the event wasn’t until March,” said Pike’s philanthropy chair. “It just meant so much to us and so much to the fraternity, so much to Bobby, that we knew it had to be the best that it could be.”

You better like hot dogs. If you don’t, the AEPi brothers will make sure you do. During the weeklong Dog Days of May, Alpha Epsilon Pi brothers grill hot dogs to sell to Northwestern students throughout campus. And much of the time, they’re dressed in hot dog suits while they do it. We approve. This year, profits went to the American Foundation for Suicide Prevention, as well as Heroes to Heroes.

Derby Days is actually not unique to Sigma Chi at UVa. In fact, it’s a nationwide fundraiser, with chapters across the country participating since 1933. The competition is tracked online as each school’s Derby Days vies to fundraise the most.

Instead of your typical fraternity fundraisers, the brothers of Delta Tau Delta raised money for their philanthropy through a concert. Cheat Codes, an Electronic Dance Music (EDM) group, was able to play in concert because one of the DTD brothers, sophomore Brett Elifritz, has a brother in the group who was able to organize the event. If Cheat Codes doesn’t sound familiar, you’ll be surprised: one of the group’s most popular songs is a collaboration with Demi Lovato titled “No Promises,” which has more than 290 million plays on Spotify. The concert raised money for DTD’s chosen philanthropy, the Juvenile Diabetes Research Foundation.

Sigma Phi Epsilon held a week-long fundraiser to benefit Big Brothers Big Sisters, a nonprofit dedicated to improving children's lives by pairing at-risk kids with mentors. Through the fundraiser, the fraternity hosted springtime activities like a pageant, a dunking booth and a bowling alley, and was able to raise $2,700 through the event that went directly to the charity.