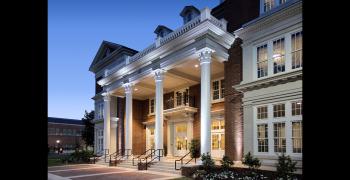 In the heart of the University of Texas campus in Austin is this white-bricked Tri-Delt house with history. According to the chapter’s website, “After purchasing the acre of land in 1938, C.H. Page & Son designated the French Second Empire Revival manor to house the Delta Delta Delta Sorority. The formal opening of the house on December 5, 1940 was celebrated in the back terrace with a live orchestra and dancing. Hundreds of guests joined in the festivities.” If Gatsby was Greek, we’d see him here.

The sorority house that almost always makes the lists -- the Phi Mu house (both the old and new one) is hard to miss. In fact, the new house is often called “the old house on steroids.” At $13 million, taking up 39,444-square-feet, and housing 68 women, we can imagine. The inside is even more grandoise: “We wanted a grand foyer -- All white, simple and clean," said the designer, who decked the space out with a glittering chandelier that originally came from The Waldorf Astoria New York hotel in the 1930s.

At the University of Oklahoma, the Kappa Alpha Theta’s were the first Greek-letter sorority on campus (1909). Their white-washed and clay-roofed home at 845 Chautauqua is as traditional as their history, dedicated to developing each of their members through community and solidarity.

The entrance to this Gamma Phi Beta mansion at the University of Alabama astounds, it’s no surprise it’s the backdrop for many Gamma Phi photo ops. The home, which is the largest in the sorority's national history, was completed in 2015 just in time for a busy rush season. (Gamma Phi had posted the largest recruitment numbers in the country for several years running.) Unique features include a coffeeshop-like study room, a 24-hour quiet room, and indoor-outdoor space.

The first sorority established at the University of Oregon (1908) also has one of the most endearing houses on campus. The meticulously-landscaped English tudor mansion was built in 1926, has a place on the National Register of Historic Places, and can house about 55 women at a time. Even better: the house has been renovated to include a third-floor sleek and modern “spa-like” communal bathroom.

With a pool in the backyard, we’re guessing the Chi Omega girls at the University of Texas know how to cool off between classes. The gorgeous brick on the exterior and wrought iron accents make this sorority house stand out on the college’s Austin campus.

The ADPi house at Ole Miss boasts an elevator, regal-themed and royal-styled bathrooms, plenty of warm woodwork, and a baby grand piano. To stay within budget, the interior designer mixed brand new furnishings with auction pieces and second-hand tables, which were repainted and styled for each room. The 18,790 square-foot house, completed in 2015, was also the first new sorority house built on campus since the 1970s.

Along with the ChiO sisters’ new home at SMU, the Kappa Alpha Theta girls boast a similarly grand new residence. When their building committee was reviewing architects’ before the design, they petitioned for something more out of the box than what other sorority houses were doing, and all of the Thetas were able to provide input. Some of the girls asked for more communal bathrooms instead of suite-style, along with a request for younger architects to collaborate on the team.

This gorgeous Sigma Kappa mansion at the University of Florida  was created by Hug & Associates, a design-oriented architectural firm that specializes in Greek housing. With three full floors, expert landscaping and classical accents, it’s a traditional beauty.

This $6.5 million, three-story, 25,000-square-foot stunner is the one of the newest sorority houses at SMU. Before the Chi Omega’s moved in, it was home to the former SMU Faculty Club. The sisters’ original home was unable to be remodeled because of safety hazards and fire codes. The group was able to raise enough funds to begin construction on this beauty, which opened in 2015.