Juul - It’s all the rave but is it worth the Anxiety? ​ 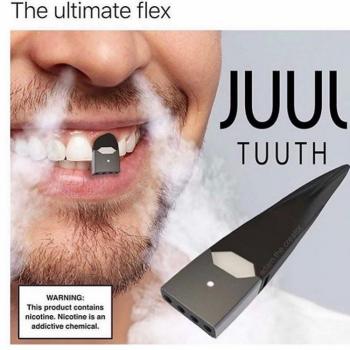 Juul - It’s all the rave but is it worth the Anxiety?

We all know how to ghost, blow O’s and puff the dragon but is vaping really worth the hype?  The more popular meme pages seem to promote vaping while joking about the increased levels of anxiety throughout society in an almost satirical fashion on just the next scroll. Most everyone knows to stay away from cigarettes so why are we so quick to vape?  It seems most people are just looking for some quick relief from their day-to-day stress and who can blame them? 
3.6 million CHILDREN under the age of 18 (middle school and high school) are now reported to be using e-cigs and other name brand vaping products. These increased behaviors have had created a monumental epidemic in regard to early onset addiction to nicotine and have set these kids up for a life long battle with chronic anxiety and serotonin imbalances.  By the time college rolls around, most while have the freedom to crush all the pods they want but at a price… And we’re not talking about the absurd retail pricing. 
The chemicals used to vaporize nicotine are now proving to increase the risks of heart disease, seizures, lung disease and all of the other negative effects smoking caused in the first place. People are now frantically searching for alternatives to quit the alternative for smoking.  Many of these negative side effects are beginning to become known to the generalized public.  Afterall, tobacco was originally promoted by doctors when the cash crop first hit mainstream markets back in the day.  The most interesting part of this epidemic is that most users were not even tobacco smokers in the first place.  So the question is what do we do now? 
For most, quitting cold turkey is simply not an option. This method often results in its own afflictions including but not limited to withdrawal and frequent relapse.  Over 800,000 people are now documented to be seeking medical help through the form of online quitting platforms such as Truth Initiative®, This is Quitting and BecomeAnEX®.  These programs are essentially one on one communications platforms utilizing formats such as text messaging to help quit while having someone available to mentor and support the process.  Juuling delivers nicotine at a rate of 2.7% faster than traditional smoking.  This means it is 300% as addictive and will need 3 times the effort to quit. 
The fact of the matter is we often put more of an emphasis on the type of dairy alternatives in our fridge or on the grain in our dog's food than what we inhale into our own bodies. So, stop spending so much time in the bathroom (it’s kind of a weird flex anyways).